I won't spoil the story by giving it all away so early so please read my up-coming February 27 piece on fishing the lower Niagara River.

It is sufficient to say that fellow talented outdoors writer and fishing buddy Paul Liikala and I did well.

Things started out slowly in Devil's Hole but picked up - just as Campbell said it would around 10 a.m.

After fishing Devil's Hole we went downstream to drift fish with minnows or else flashy Kwikfish baits - a modified and better-action model then are Flatfish crankbaits.

I've fished with Campbell several times before and have always enjoyed great success and even more so the experience.

Frank said the best angling this winter has been between 10 a.m. and 1 p.m., though we caught fish all the way up to 4 p.m. before calling it quits while fishing the fabled "Bar" at the mouth of the Niagara River.

Campbell did say too that business has been good and expects a great March. The former is a bit surprising since the economy's been in the tank but Campbell perhaps correctly notes that fishermen are going to fish no matter what their wallet may hold.

He said many of the guides are doing well - a point noted at the Lewiston, NY boat launch where we saw a dozen trailers with their cargo on the river and many of the folks catching lake trout, brown trout and steelhead trout.

I managed to catch at least one of each species, eight fish total including two lakers that would go 12 to 14 pounds each.

Paul caught some fish, too, as did Campbell.

Any steelhead angler who hasn't gone the route of fishing the lower Niagara River during the winter up through April really ought to give it a go. It's a fantastic world-class fisheries and a hoot to do.

Campbell doesn't discourage keeping fish but does say most of his clients practice catch-and-release.

Watch the February 24 outdoors for more details and fun.

- Jeffrey L. Frischkorn
Posted by News-Herald Blogs at 10:51 AM 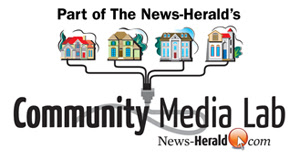